Due to the nature of yaml files, format and indentation of lines is highly important for Luna to understand what is being customized. As a result, many errors can be caused by mistakes in syntax.

As a rule, all indented lines under an un-indented line are “nested” and properties of the un-indented line. As lines can be nested under already nested lines, it becomes very easy to see the configuration as done in tiers.

Nesting Visualized As everything under “components” is more indented than components, it is considered to be nested under it in the blue box.

As yaml is technically a coding language, it is extremely picky with syntax. Something as simple as wrong capitalization or missing/extra spaces will cause errors. Usually, your Text IDE will suggest the correct term/word with the correct capitalization, but it is still important to take note of the following syntax rules.

Both nested and un-nested lines must have their own individual line. Accidentally crowding into the above line will cause errors. Empty lines are allowed and recommended for help with organization.

There must be a space between “:” and <string>. No more, no less. The text should display in the correct colours if the syntax is correct.

For component lists, there must be a space between “-” and <component name>. It will not display the wrong colour if incorrect, but will produce an error when run.

This includes capitalization, spacing, spelling, etc. They must be completely the same when referring to the same window/object/item, otherwise Luna give an error stating that the referenced object is undefined.

A list of important commands that you will most likely need when creating your Luna Engine Modifications.

Type is what kind of component you are using. Depending on what the type is defining, there are a number of valid strings.

Version, also known as Version History, is to keep track what version your Luna Config is. It is useful for Version Control and keep track of changes.

Specifies the source image file. By default, Luna looks for all source files in the “systems” folder. Via encasing the filename (without file extension) in quotation marks, it’s possible to direct Luna to a subfolder. For Example:

This yaml file is used for general configuration, something like a core engine. When using a “default” setting in any YML, it will refer back to the presets. It is possible to define multiple presets as long as they all have their individual names.

This yaml files defines the animations that can be called on in Block 3: Events of every scene/screen configuration.

Currently, all animations are keyframe animations with two keyframes:

This makes simple transition animations such as fade in from the top, or move left easy to set. As end keyframe offset is permanent unless it is changed by another animation, it’s suggested that both offset x and y is either set to 0 in the ending keyframe or a dedicated animation exists to move the offset back to 0, 0.

All scene-related Luna YMLs are organized in the same way. The overall layout can be defined via four distinct blocks that all have their individual functions. By understanding what each of these Blocks do, it becomes far easier to understand what needs to be changed to get the intended effect.

Contains the default windows available for configuration. Allows for the most basic configurations for windows such as size, position, spacing, font used, window skins, and much more.

For a window to appear, it must be listed somewhere within the layout. As such, there must be a “MainLayout”. Will only accept existing windows. Attempting to add a nonexistent window under layout will result in nothing happening.

Also allows for the ability to link windows together and move them as a whole unit.

Used for animations. Specifies what should happen on an event such as when something is selected, etc. Only predefined animations in the animations.yml can be used. Attempting to use a nonexistent animation will cause an error.

Each window is customized individually, allowing both the adding of removing of individual components, as well as components that only appear of a certain condition is true. The block of Luna’s customization is here.

Block 1 of all scene yaml files indicates the basic setup of each window that appears in the scene/screen. Only existing and defined windows can be configured. Each window has its own set of configurations under its window name.

If the parameter is predefined in preset.yml, it’s possible to call on those presets in all Block 1 configurations instead of redefining it here (but it’s still possible to redefine it if preferred).

As mentioned before, layout determines the order windows are drawn in and how they are paired in relation with each other.

Windows can either be independent free bodies or paired with other windows to make a larger, multi window unit. This makes moving a set of windows more straightforward as it’s possible to just edit the position of the layout element rather than the windows themselves.

This block defines the animations that will play on “events” in the UI.

While there are limitations to what and how something can be animated depending on the manner windows were set up and the way Luna is structured, animations can be targeted at individual components or lunatic items as defined in Block 4: Lunatic by combining the component name with the window.

Targeting the “HpBar” component defined for the “BattleStatus” window in Block 4: Lunatic.

Targeting Lunatic item 0 in the “BattleStatus” window as defined in Block 4: Lunatic.

Unlike the previous blocks largely only dictate the overall formatting of the windows, Block 4: Lunatic allows for total customization.

While it is the most complex, it still follows similar rules to the previous blocks despite focusing on individual components of windows instead of the window itself. Due to it allowing for the customization of the content of windows, not formatting sections correctly will often result in unintended effects or errors.

Despite all defined elements are technically called components, the “components” section of “contents” defines elements that are only rendered once on the window. This is often used for visual accents or designs. “lunatic items” on the other hand are rendered once for every instance of “data” that exists in the window. Examples of this would be the different commands in command windows, or each individual item in an inventory. 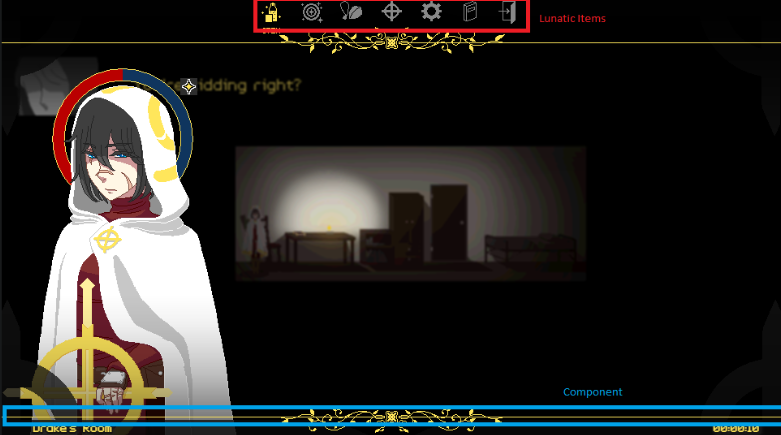 Protip: It is also possible to move the Lunatic configurations for a window to a separate file for the sake of organization. Identically to how it’s done in block 1, the engine must be pointed to the correct file:

Below is an example of the basic Lunatic block for two different windows in the same scene.

Below is an example of a complex Lunatic component.

Defines the component as an image. Requires a source file. Used for a lot of things.

A straight-forward, rectangular gauge. Generally used for elements such as HP bars. Allows for a gradient and can be rotated.

A type of gauge that uses a source image to mask off instead of a rendered rectangle.

A complex type that is generally used for grid like elements such as actor states. Often has its own Lunatic block to define how the grid itself is rendered. Somewhat like a window within a window.

A rarely used component that calls from the icon file. Often used for elements such as actor states and items. The above is an example of an icon type component under a grid type component.

Allows for the rotation of components. Largely used for gauges that drain in directions under than from right to left and other elements that require rotation (to save having multiple source images, often).

Vertical Atlas is an alternate version of Source Rect that allows for more automated source image splitting. Instead of manually defining the source area, this command tells the engine to split the image into equal parts and use them as the sources sequentially. While it is not nearly as flexible as source rect since it requires images to be set up in a specific why, it makes automating source rect for a vertical line of buttons extremely easily. Use instead of source rect when you can.

Source Rect is a method of telling Luna to only use a portion of a source image rather than the entire image. This allows for the possibility of using only a single image to define all UI elements and may help with preloading issues. It is also possible to use sourceRect within a conditional.

Conditions are the bread and butter for Block 4 customization when changing the way a certain thing is rendered or if it even is rendered when certain conditions are true. At its simplest it allows for the switching of a button graphic based on selection. At its most complex, it can go as far as allowing a degree of visual customization based on elements such as items equipped and switch and variable status.